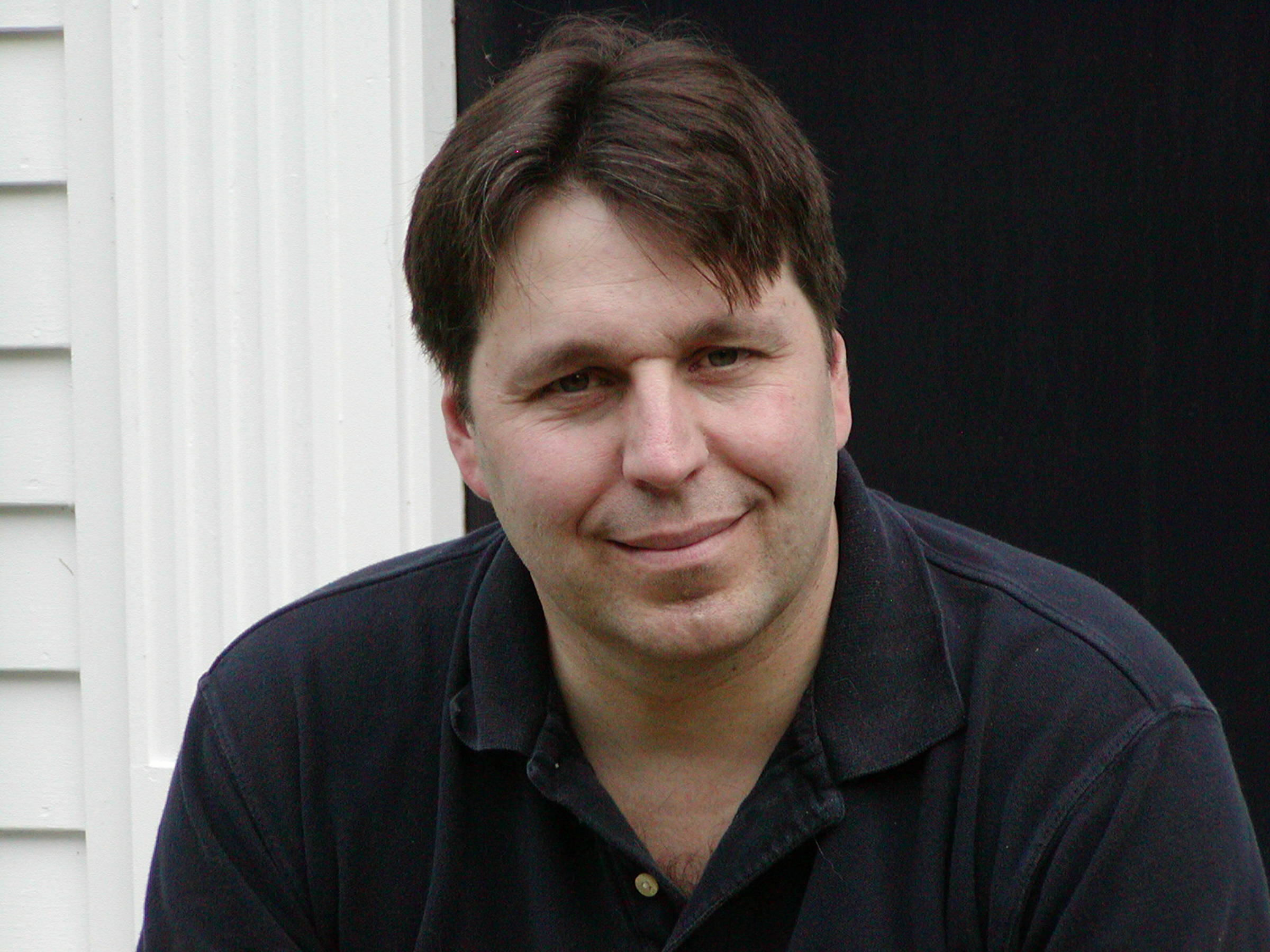 We’re talking to legendary author R.A. Salvatore, creator of some of the most iconic characters in Dungeons & Dragons during his history as a writer--a history that spans over 30 years. Today we’re discussing two characters in specific: the dark elf hero of Forgotten Realms, Drizzt Do’urden, and his astral panther, Guenhwyvar. The duo will be featured in an upcoming deluxe 6-inch scale action figure 2-pack.

Q: The character Drizzt first appeared in your novel The Crystal Shard in 1988, making him older than a lot of current D&D players. As a longtime player yourself, did you ever imagine the game would be as popular and widely accepted as it is today?

A: The game? Well, maybe not to this level, but when I started playing, circa 1980, I knew I had found something wonderful. RPG meant cooperative roleplay and it satisfied me in so many creative ways. The jump to the mainstream surprises me a bit, but I think we’re all better off for it, as it’s a positive force.

Q: What do you think has fueled the current resurgence of D&D, especially over the last five years?

A: The need for human contact instead of just playing video games plays a role, I’m sure. Also, so many celebrities and mainstream shows - Big Bang Theory,” “Stranger Things,” etc. – widening the viewership and letting people know about D&D. I remember many years ago watching the wonderful “Freaks & Geeks,” and the final episode where the younger kids (the geeks) convince the coolest freak to join in their D&D game. James Franco’s character gets into the roleplaying with enthusiasm, turns out to be a good player, and Carlos the Dwarf becomes legendary overnight.

How I miss that show. Judd Apatow let a god one get away.

Q: You’ve written 36 novels featuring Drizzt and Guenhwyvar. These are obviously characters you care deeply about. What was your reaction when you first saw the upcoming action figures?

A: First thought: I can finally tell my readers that yes, there already is an action figure! They’ve been asking for one for decades. Actual decades. And then I just sat back and thought how amazing is this journey I’ve been on.

The figure itself looks really great. I haven’t held one yet, but the images look spot on.

Q: The fantastic worlds of Dungeons & Dragons are filled with legions of iconic characters. Out of all those larger-than-life heroes and villains, who would you love to see as an action figure?

A: The Companions of the Hall, of course! And Jarlaxle and Entreri, Athrogate and Pwent. That’d be a great set.

Aside from my own works, there are scores of great Realms novels full of life and wonderful characters. If I started listing them here, I’d go on forever. The mage Elminster certainly should get a figure, or five.

Q: We mentioned earlier that you’ve written 36 novels featuring Drizzt and Guenhwyvar, most as trilogies. When you look back on all those stories, is there one that stands out above the others as your personal favorite?

A: That’s a tough question. The answer is always: “the one I’m working on,” or at least, I hope that’s the answer, and I really do think these latest two trilogies have been the payoff for a long, long investment. However, the two books that constantly come back to me whenever I consider this question are “Homeland” and “The Companions.”

“Homeland” was the fourth book I wrote with Drizzt, but the first chronologically in his journey. In it, I was given the privilege of creating the drow in the Forgotten Realms. I didn’t create the race – the drow go back to Gary Gygax and the original TSR team - but the details on them were thin, so I got to make Menzoberranzan. I spent many hours considering how to go about this task. Were the drow really “evil”? More so than we might consider the human cultures? Or were they trapped in a system that had come about beyond the longest memory, where corrupt demonic power held them in thrall?

Since these are rational and highly-intelligent reasoning beings, and since I had already shown Drizzt as a heroic character, it had to be the latter. It had to be the influence of Lolth on this relatively small society.

So I began to consider how a society like that might survive the constant strife and tension, and then I had a thought. I grew up in an Italian neighborhood in the northeast, so I pulled out my well-read copy of Mario Puzo’s “The Godfather” – really! – and based the houses of Menzoberranzan on the New York families detailed in that work. Once you’re in, it’s hard to get out (particularly when you’re surrounded by the merciless Underdark), as both Drizzt and his father learned. Making that world come to life was quite an experience.

What really made “Homeland special for me, though, was that it was the first time I consciously and repeatedly asked myself “why?” Why was I writing? What was the purpose of each book? Before that, I wanted to just write fun adventure novels, a bit of escapism, a bit of swordplay, a buddy fantasy in a coming-of-age adventure tale. I sprinkled in a bit of my philosophy of life and of right and wrong – the stupidity of racism is evident in all three books of the first trilogy, Icewind Dale. It became more than that with “Homeland” for me. Perhaps it’s because that’s when I started doing Drizzt’s journal entries (the ones in the Icewind Dale Trilogy were added later), or more likely, those entries came about because I was determined to put more of myself into the books. Before “Homeland,” I was working a full-time job an hour commute each way, and with three young kids and a working spouse. I could fashion a good adventure under those circumstances, but after I quit my day job in 1990, I realized the importance of my writing to me. This was my journey. This was how I would make sense of the world around me. I don’t think I fully appreciated that until many years later, but when I look back at those early writing days, I can fully see that turning point.

With “The Companions,” I had the pleasure of trying to answer that age-old dilemma “if I only knew then what I know now.” Like “Homeland,” this was a very difficult book to write, in no small part because I was doing something you’re really not supposed to do in a novel. I got to bring back from the dead and follow the journey of three main characters, each with a different reason for accepting the chance to return to this world from their state of limbo. I got to explore the motivations of Regis, Bruenor, and Catti-brie after returning them to life (as newborn babies) with full memories of their previous lives, and with the sensibilities of an adult.

I went into the writing with trepidation – we were doing this to help reboot the Realms for reasons outside the novels, and were taking big chances here – but once I started writing, the worries fell away. The whole book became so natural and easy to me. I knew these characters so well, and understood why they were returning – not the top-level mission they saw before them, but internally. Why it mattered to them beyond their love of Drizzt. I did what I set out to do, and if it hadn’t worked, the Legend of Drizzt probably would have ended with “The Last Threshold.” But it worked. It felt right on every level, even with Bruenor’s character explaining throughout the reason you really can’t do that in a novel! I love that book.

Q: Drizzt has overcome endless challenges over the years. He’s slain dragons, escaped the Underdark and the evil of the Drow to become a hero of legend, and endured the loss of his dearest friends. With so many years and adventures behind him, can you tell us a little about what the future holds for Drizzt?

A: The adventures, the dragon fights, the wars, have always been the catalyst for the character growth, and that sword and sorcery is what makes the stories fast and fun. So, yeah, that won’t change. Really, though, the thing that has kept the stories going is that they are the tale of growth, a continual coming-of-age story, so to speak, and not just for Drizzt, but for the other Companions of the Hall, and for many of the side-characters – Entreri, Jarlaxle, Kimmuriel, Ivan and Pikel, Athrogate, Pwent…too many to count. My books are about characters more than they are about battles. They’re about nuance and failure, growth, love and friendship. Mostly, they’re about me striving to learn, to keep learning. Drizzt strives for perfection, both physical in his martial arts, and philosophical. He’s constantly trying to make sense of…everything. In the newest books, he’s found a teacher in a grandmaster monk.

Which begs the question: will he be learning until he dies, or will he die when he stops learning?