Not available to ship to Canada.

Snake Eyes. Storm Shadow. A rivalry for the ages, born out of the shattered bond between brothers-in-arms. We’ve teamed up with Mego Corporation, creators of a classic action figure style with soft goods costume pieces, to bring these iconic G.I. Joe characters into the fun, retro Mego style for the first time ever… with the same premium details G.I. Joe fans look for.

Ages 8 and up
CHOKING HAZARD: Small parts. Not suitable for children under 3 years. 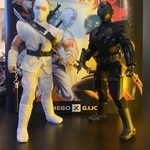