The amazing storytelling and culture-shaping legacy of Marvel now spans 80 years. Inspired by both iconic Marvel comic books and blockbuster movies from the Marvel Cinematic Universe, these the highly detailed 6-inch-scale Legends Series action figures are a perfect tribute to that legacy.

A creature from a primordial and sinister era of the universe, Hela’s power is unlike anything else in the Nine Realms. Armed with the ability to unleash unlimited weapons in astounding and deadly ways, Hela seeks vengeance against those who imprisoned her eons ago, ushering in the new era of cold brutality for Asgard and the universe at large.

An Asgardian soldier with an obsession for armaments from other worlds, Skurge has collected an arsenal of strange and incredible weapons from across The Nine Realms. Now in Asgard’s time of struggle, Skurge must use his amazing armory to ensure its survival.

Celebrate the Marvel Cinematic Universe with this Skurge (appearing for the first time in the Marvel Legends Series) And Marvel’s Hela (with new accessory) 6-inch-scale action figure 2-pack.

With premium deco inspired by the Thor: Ragnarok film where Skurge and Marvel’s Hela join forces to threaten the planet Asgard, these figures make a great gift for fans of Marvel Entertainment.

Other top rated products
Powered by
4.5 4.5 star rating 6 Reviews
Write A Review
Ask A Question
Thank you for posting a review!
We value your input. Share your review so everyone else can enjoy it too.
share
share
share
Thank you for posting a review!
Your review was sent successfully and is now waiting for our staff to publish it.
Thank you for posting a question!
Please click on the link in the confirmation email we just sent you to submit your question.
Your question will appear on the site once someone answers it.
Clear All
Filter Reviews
Clear All
More Filters
FILTERS Clear All
Rating
Reviews
Show 6 Reviews
Rating
All Reviews
6 Reviews
Sort: Select
Updating Results
Verified Reviewer
What is a Verified Reviewer
A Verified Reviewer is a shopper who has confirmed an email address, or connected a social network with Yotpo, providing an added level of transparency and trust.
0 star rating
01/21/20
On
share ' Share Review by Anonymous User facebook facebook Share Review by Anonymous User twitter twitter Share Review by Anonymous User LinkedIn linkedin Share Review by Anonymous User
Was this review helpful? 0 0
01/21/20
J
Joshua P.
Verified Buyer
What is a Verified Buyer
A Verified Buyer is a user who has purchased the reviewed product through our store.
2 star rating
08/24/19
Defective Skurge
Hela is great, but the Skurge in the pack had defective paint application that messed up face. It looks terrible. 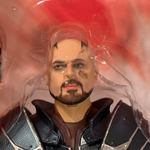 and you get Skurge too? With three weapons and extra hands?

The amazing storytelling and culture-shaping legacy of Marvel now spans 80 years. Inspired by both iconic Marvel comic books and blockbuster movies from the Marvel Cinematic Universe, these the highly detailed 6-inch-scale Legends Series action figures are a perfect tribute to that legacy.