It has been a busy year since we set off on an adventure to bring you an updated version of the HeroQuest game and we are working hard to level up our communication. Emails were sent to backers last week with an update on reward delivery, but we’ll cover that info again here before open these boxes up to show you what’s inside! 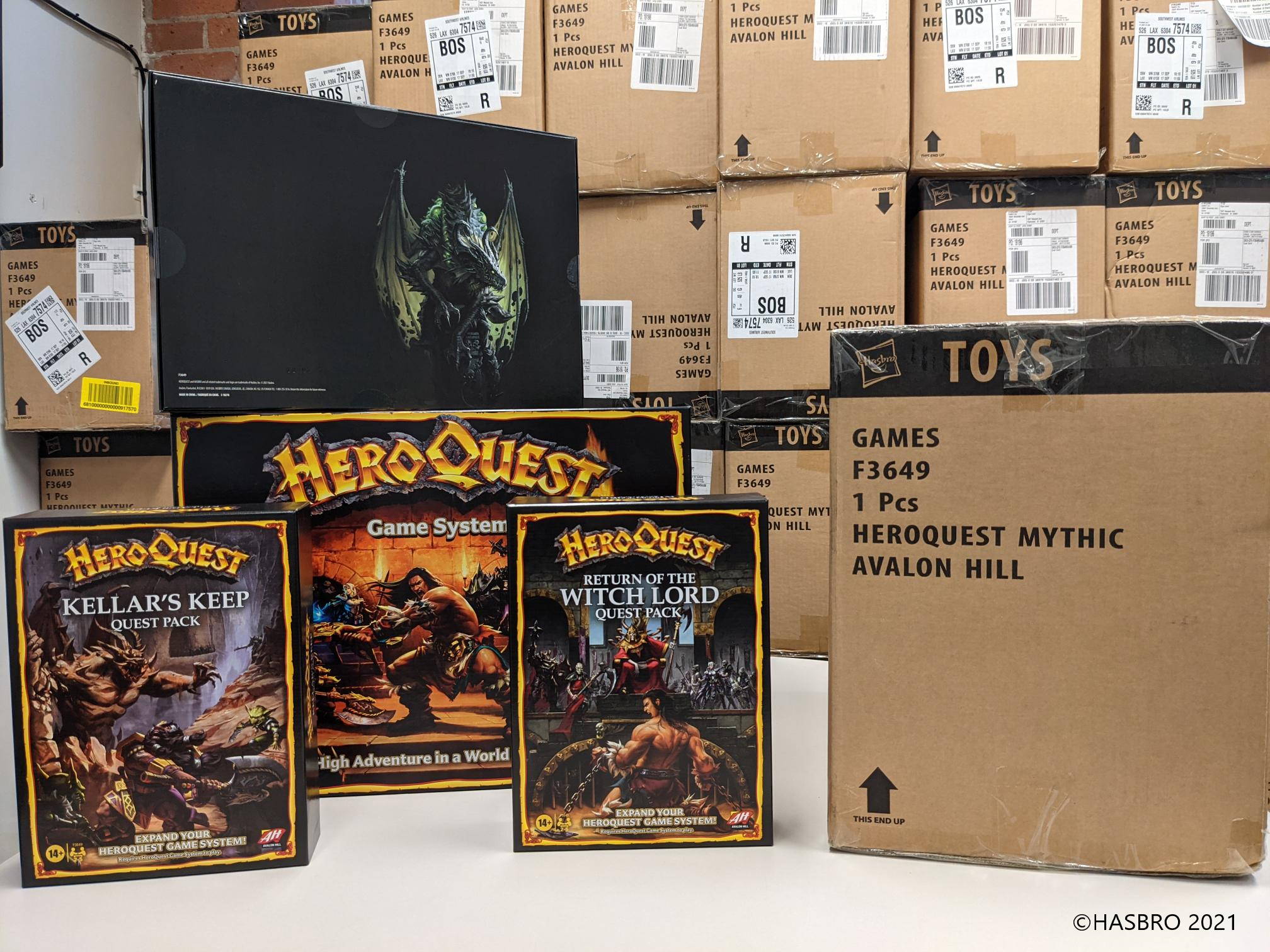 Mythic Tier backers, it is officially time to get excited - our team has printed your shipping labels. Once FedEx ships your order you’ll receive an email with the tracking info for your order. From there you’ll be able to follow your order along until it arrives at your door, just in time to quest your way through the holidays!

Now for the less exciting news: Heroic Tier backers have a bit longer to wait. We’re sorry to announce that delays have affected the shipment of our Heroic Tier rewards and the timetable for their delivery has been extended. Currently those rewards are in a cargo container being shipped across the Pacific, which means they still have to reach port, get unloaded, and make it to our warehouse. Current estimates place the shipment of Heroic Tier rewards starting in December, but please note there is the possibility there could be future delays. Know that our team working hard to get the game to you as soon as we can.

With the shipping updates covered, let’s get on to the big reveal – what is inside all of these boxes that come in the Mythic Tier rewards package? 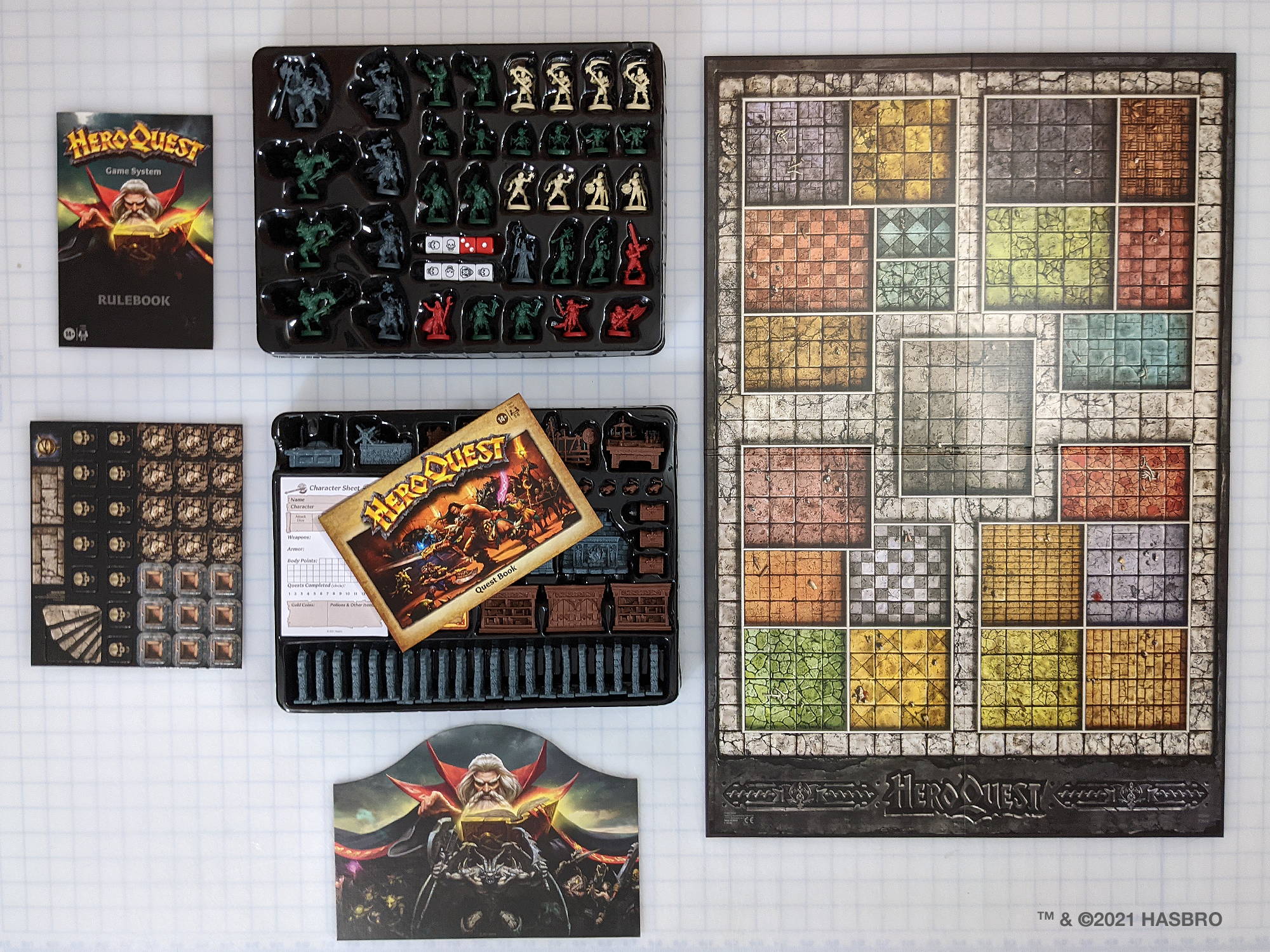 Here you can see what comes in the core HeroQuest game box. The game board has been expanded from the original, with each square measuring 1x1 inches so that you can fit multiple figures into a room. And speaking of, we have two full trays of figures! Monsters and heroes comprise one tray, while the second is loaded with furniture, chests, and doors. SO. MANY. DOORS.

You also get the classic array of traps and other tiles, Zargon’s screen, the Quest Book, the rulebook, character sheets, dice, and all the necessary cards to play HeroQuest. 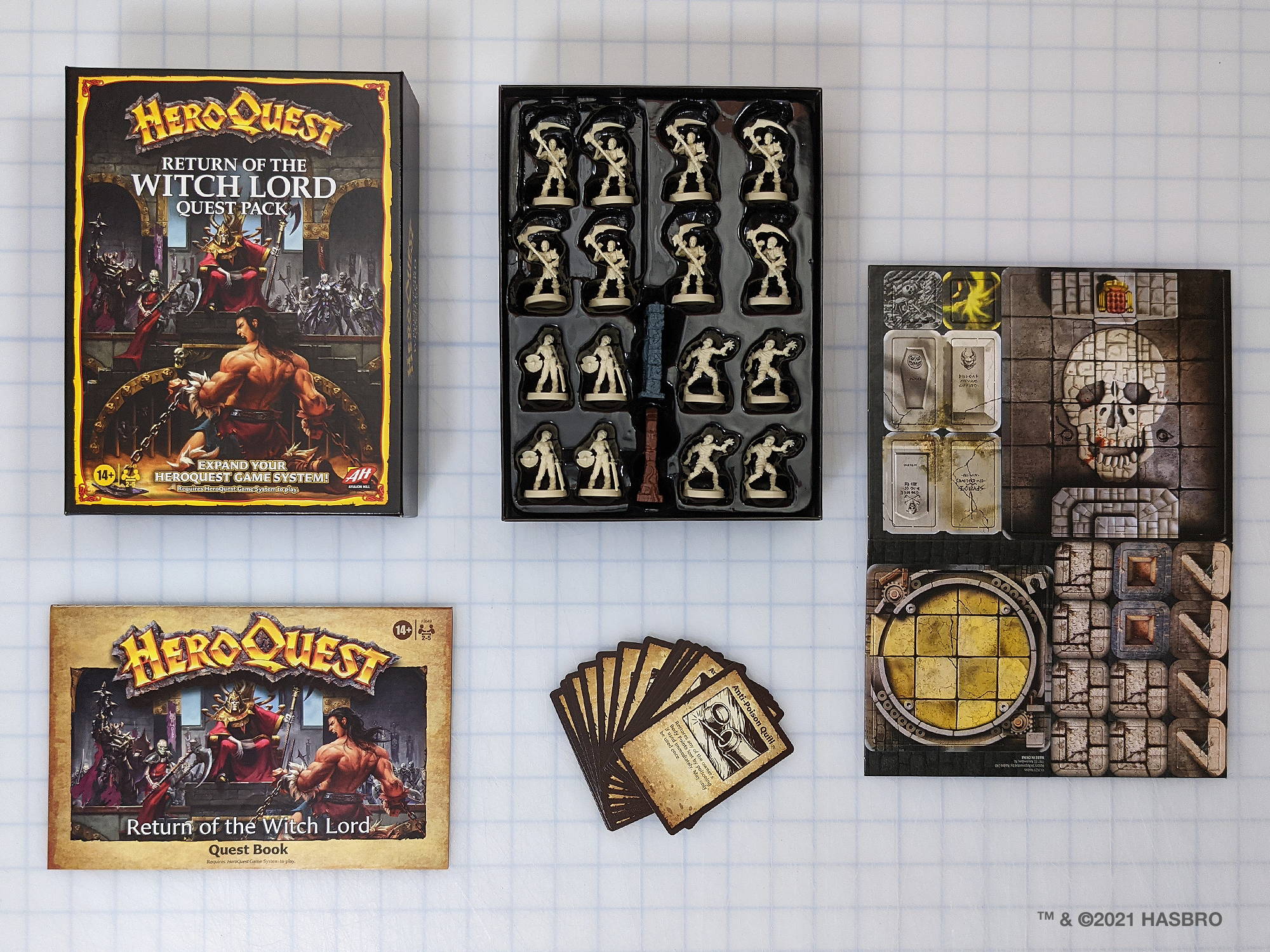 Taking a look at the expansion sets you can see that Return of the Witch Lord is an ode to the undead. It contains more of the skeletons, zombies, and mummies you get in the core set, as well as more doors, cards, and tiles. All of this is used in a series of quests as the heroes seek to defeat the Witch Lord once and for all! 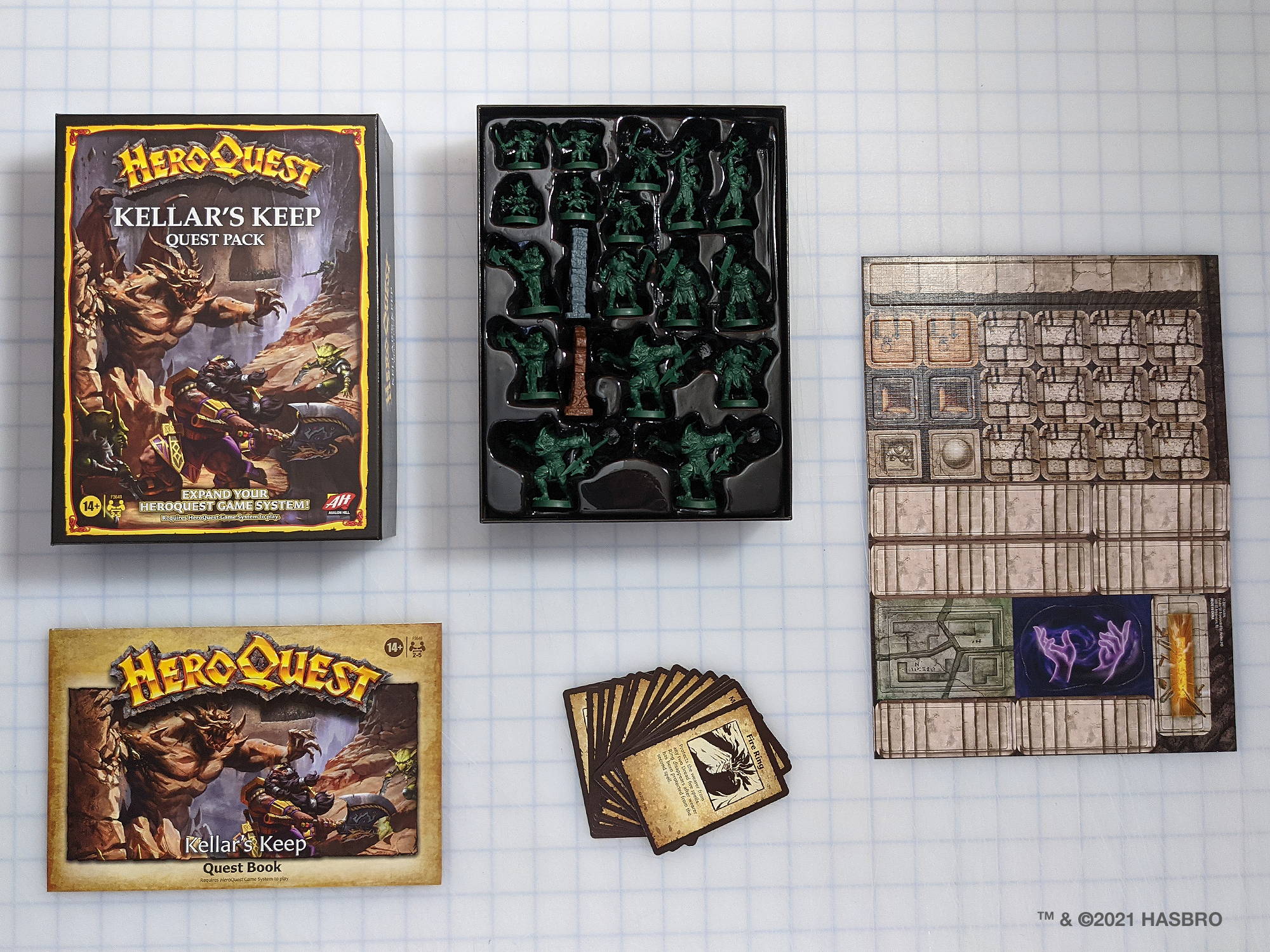 Kellar’s Keep focuses on those minions of Zargon with a little more life in them. In this set you’ll find more goblins, orcs, and abominations to terrorize the heroes. And just as the previous expansion you’ll find more doors, cards, and tiles to suit the set of quests as the heroes must save the king and his army from the depths of Kellar’s Keep. 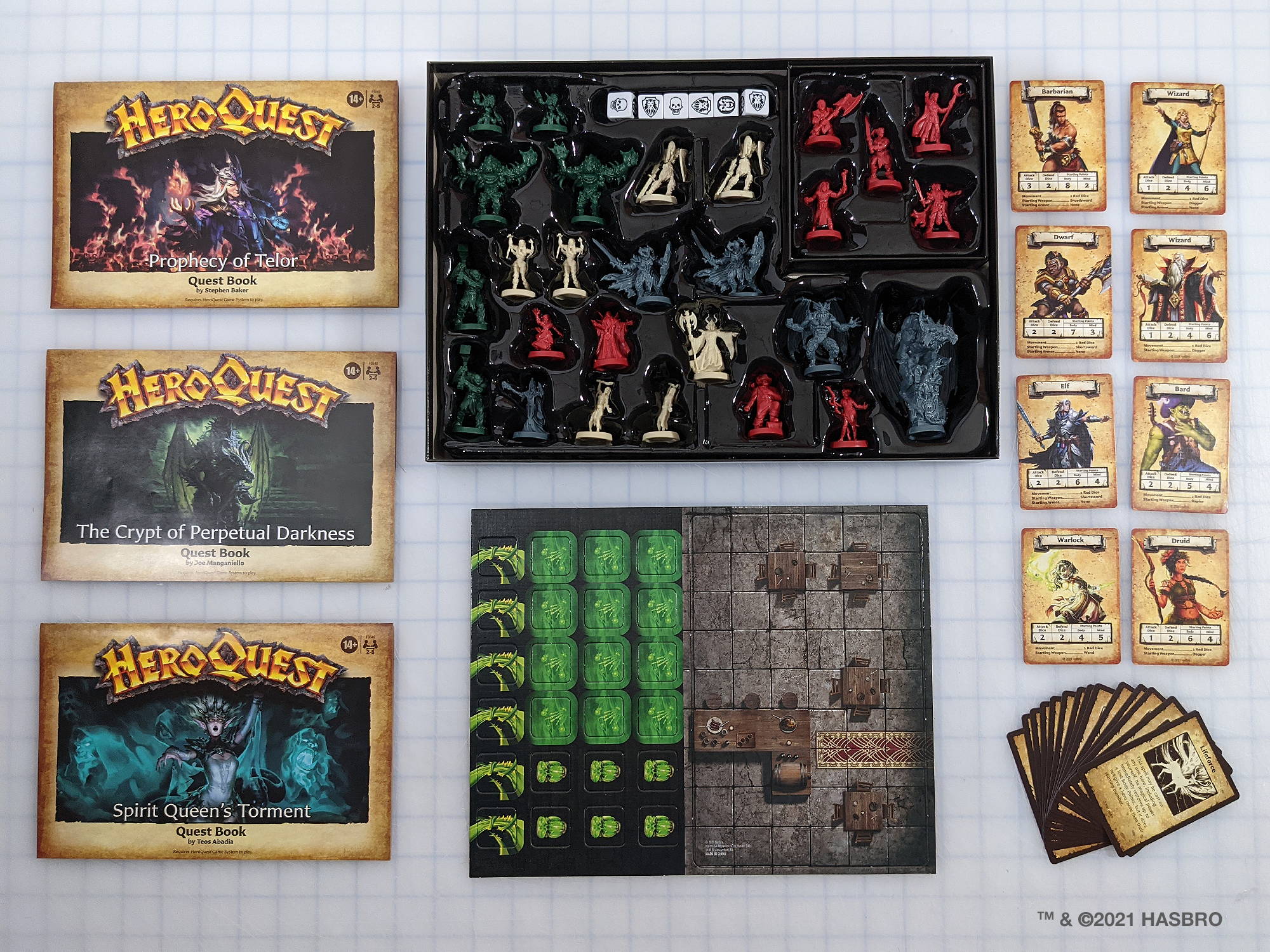 The fourth and final box contains all the additional content that the Hasbro Pulse campaign earned via stretch goals, and it is a lot! If the previous two expansions weren’t enough, there are even MORE minions contained in this box, including the second gargoyle figure. You’ll also see Zargon receives a couple big time baddies – for the first time, the Witch Lord is seen in miniature form. And of course there is the largest HeroQuest figure yet, the dreaded dragon Venim!

Thankfully the heroes also get some support to help combat these additional foes. In addition to alternate sculpts for the original four heroes, there are three different characters – the Warlock, the Druid, and the Bard. There is also a figure for Mentor that you can use as an alternate to the Wizard! And finally, fan-favorite prisoner Sir Ragnar is given a miniature to help you make sure he’s not lost when you free him from his cell in the original Quest Book.

And what better way to try out these heroes than with adventures for them to experience? This box contains an incredible THREE original quest books to discover:

To support these quests there is also a added tile sheet, more cards featuring items, artifacts, and more, and additional combat dice to keep up with the heroes’ growing power.

All together, the Mythic Tier reward package is packed with gorgeous miniatures and thrilling adventure that will keep you and your friends questing for hours. And as backers begin to see your rewards arrive, we hope you’ll share them with us! We’ve launched an Instagram account @AvalonHillGames and would love to see your unboxing, a set up quest, or even your own quest designs! You can also find us on Twitter @AvalonHill, or you can pester Zargon himself @HeroQuest.

We’ll also be sharing more news in the coming weeks about future HeroQuest content, so make sure to follow the above pages or stay tuned here for more info. The Quest is Calling!